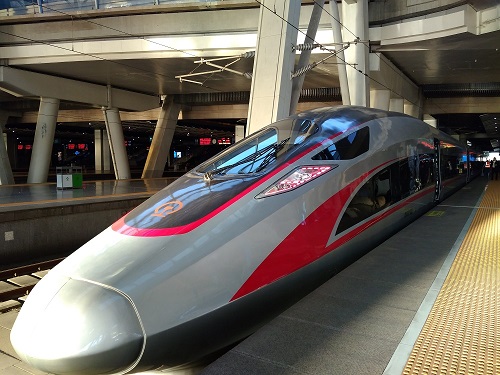 Bullet Train from Beijing to Shanghai

Taking a bullet train (high-speed train) from Beijing to Shanghai is a very convenient and comfortable way to travel for families, solo travelers, and business trips.

With a distance of 1,318 kilometers (819 miles), the average speed during the journey between Beijing and Shanghai is 300 kph.

Each train has a different journey duration even though they run on the same railway. The fastest bullet train takes 4 hours 18 minutes while the slowest one takes 12 hours. We will explain the reason for this in this article.

To help you prepare before you travel to China, please read the following information, which is included in this article:

More than 40 high-speed trains run to Shanghai from Beijing. From 06:00 to 21:00, you can find at least two trains available each hour.

To book your train tickets from Beijing to Shanghai, it’s better to choose the arrival station that is closer to your destination.

Why the Duration Is Different

Not every train is able to arrive in Shanghai within 4½ hours of leaving Beijing.

The G trains take about 4½ to 6 hours to complete the journey while the D trains take 12 hours. Why?

The Different Speeds of the Two Train Series

There are two high-speed train series operating on the Beijing to Shanghai route. One is Fuxing Hao and the other is Hexie Hao.
* The two train series are not classified by the letters “G” and “D”.

Trains belonging to the Fuxing Hao series are the fastest ones in the world. The journey only takes about 4½ hours with a top speed of 390 kph.

Trains belonging to the Hexie Hao series usually operate at a speed of 300 kph. For the overnight trains, their speed will slow down to 200 kph.

Fewer Stops and an Earlier Arrival

The fastest bullet train is G17, which departs from Beijing at 19:00 and arrives in Shanghai at 23:18. This train only stops at Nanjing South Railway Station for 2 minutes in the middle of the journey.

Most of the other trains have more than two stops (11 is the highest amount) along the route from Beijing to Shanghai. In total, there are 24 stops along the railway.

Among the 40 bullet trains running from Beijing to Shanghai, only three trains offer sleeper tickets at night.

The three sleeper trains belong to the D series: D701, D705, and D709. The journey duration is 12 hours from the nighttime to the morning. Passengers can have a good rest on the train and save a night’s hotel bill.

Here are the main differences between a sleeper ticket and a seat ticket for the Beijing–Shanghai high-speed trains.

* Learn detailed transportation information about each station by clicking into the specific pages.

What to Eat on The Train?

You are recommended to use our China Train Booking app to book your tickets and track your bookings anytime and anywhere. Get your free trial now:

Other ways to book your China train ticket: How to Buy a China Train Ticket.