Opened in 2008, Zhangjiajie Railway Station is fairly small and only serves normal-speed trains. It is, however, an important transportation spot for travelers to Zhangjiajie. 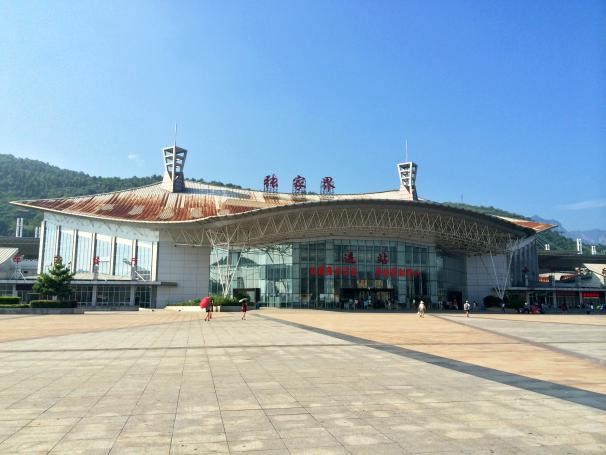 In this article, we provide information about train schedules, station layout, and how to reach famous attractions in Zhangjiajie from the station, along with other tourist cities like Guilin, Fenghuang, and Chengdu.

Trains to Other Cities

The Layout of Zhangjiajie Railway Station

In Zhangjiajie Railway Station, there are 14 ticket windows for buying, collecting, rescheduling, and refunding tickets. In addition, there are five main waiting rooms and two information windows.

There is a baggage consignment spot 100 meters to the right of the exit in Zhangjiajie Railway Station.

Each piece of baggage costs about 10 or 20 yuan.

All these buses pass through Zhangjiajie city center, and cost 2 yuan per person.

The distance between Zhangjiajie Railway Station and Coach Station is about 150 meters and you can walk there in just three minutes. At the exit of the railway station, you will find signs leading to the coach station.

“你好，请问张家界汽车站怎么走？”
“Excuse me, could you please tell me how to get to Zhangjiajie Coach Station from here?”

Getting to Other Places from Zhangjiajie Railway Station

For domestic flights, there are about 59 lines to and from Beijing, Shanghai, Guangzhou, etc.

For international flights, there are about 20 lines to and from Seoul, Osaka, Bangkok, etc.

Zhangjiajie National Forest Park was the first national forest park in China, and is one of the World Geoparks listed by the United Nations.

In the movie Avatar, many of the scenes from Pandora Planet came from the mountains of Zhangjiajie.

Zhangjiajie National Forest Park is far from Zhangjiajie Railway Station, so there is no direct bus for getting there. Taking a coach is recommended, as follows.

* There are three different options:

Choose one of these entrances according to which scenic spots you want to see first in the park.

* The coach clerk will ask you to pay after you board.

There are two recommended ways of going to Fenghuang from Zhangjiajie Railway Station.

You are welcome to book your train tickets to Zhangjiajie using our China Train Booking app. You will receive your tickets within 3 minutes of paying, and we also offer 24/7 one-to-one customer service.