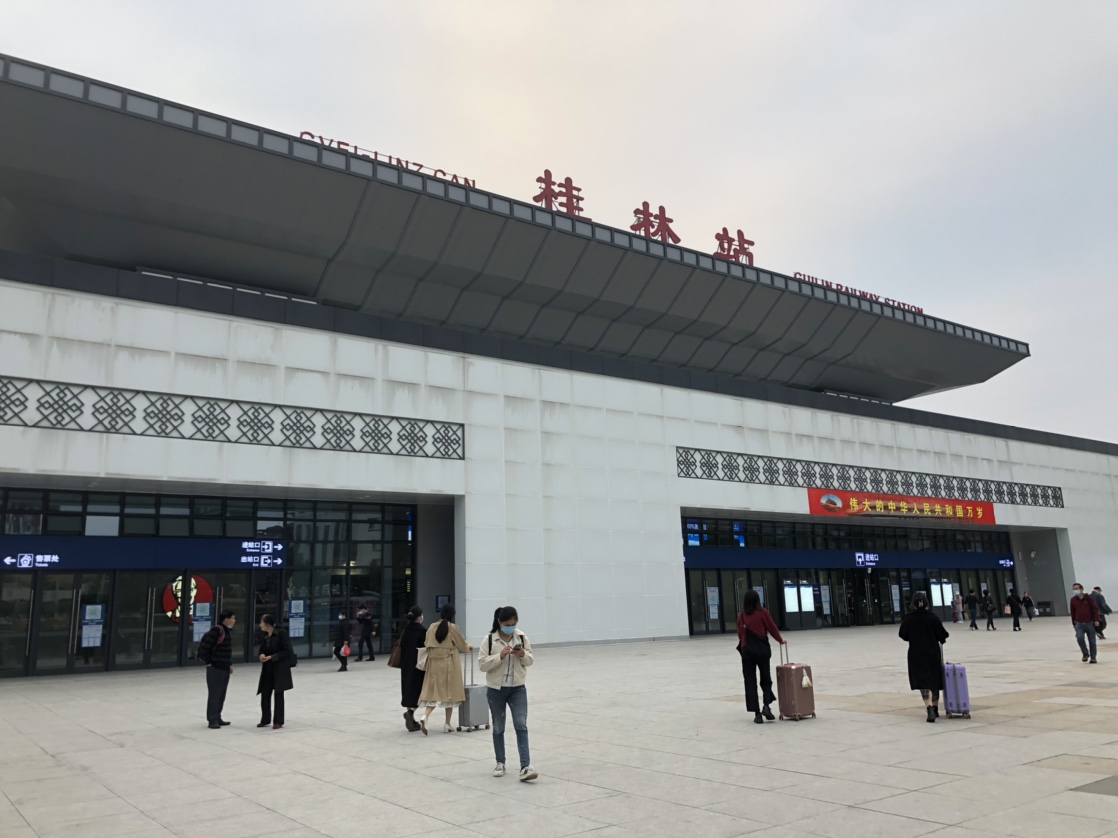 It is a mixed railway station operating both high-speed trains and normal-speed trains. There are many direct trains running from Guilin Station to big cities in China, such as Beijing, Shanghai, Guangzhou, Shenzhen and Xi’an. 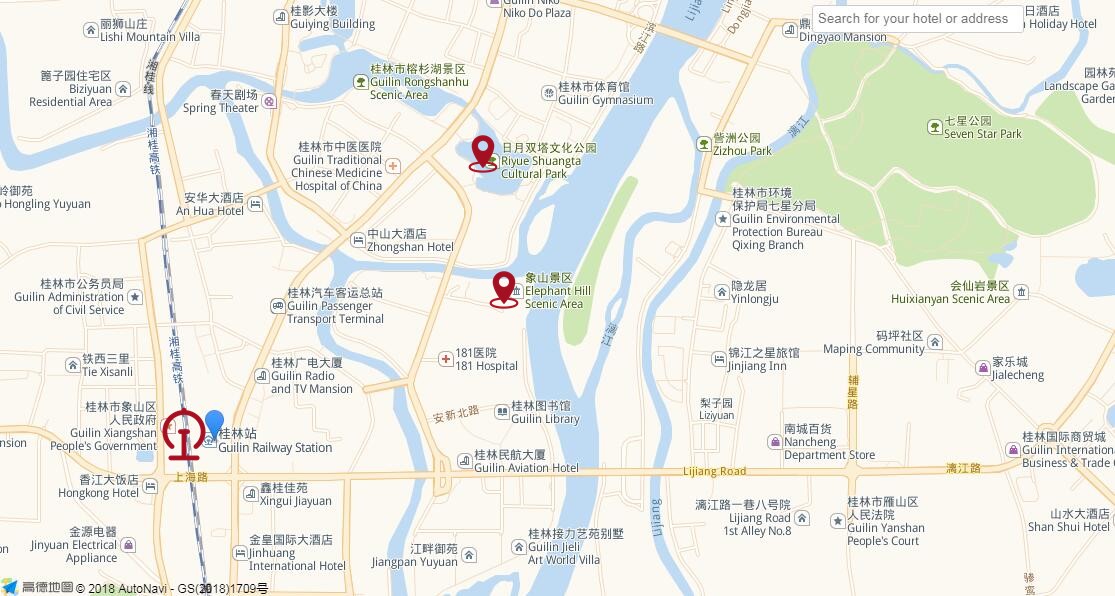 Guilin Railwya Station is lcoated in Xiangshan District, which is the city center of Guilin City, and it is close to many local attractions:

Want to check the online map on your cellphone anytime and anywhere? You use our China Train Booking app and use this function for free!

The Layout of Guilin Railway Station

* Kindly remind: The escalators at Guilin Railway Station is under repair from October 2018. If you have mobility difficulties or your baggage is too heavy, you can seek for help from the service desk on F1.

The plan of Guilin Railway Station

Guilin is a small and beautiful city in China, and its railway station is likewise: small but perfectly formed.
It only has two floors with a big front square, so it is easy to find your way round and use the station.

Learn what can’t be carried on to trains in China by visiting: Baggage Rules of China Rail

There are only two floors in the main hall.

If your waiting room is on the first floor, you can simply reach the platform after having your ticket checked.

If your waiting room is on the second floor, you need to go downstairs to get to the platform after having your ticket checked. Please follow your train number (there are LED screens showing the train numbers) to find the right platform.

Passengers will be guided to the arrival hall after they get off a train at Guilin Railway Station, and they can leave the station directly from the exit passage.

Guilin Station is in the center of Guilin, so, there are many buses available there from almost every district in Guilin. It costs 2 yuan per passenger no matter how far you go.

There are two bus stops around Guilin Railway Station to different directions: one is on the same side of the street, the other is across the street. Please make sure you wait at the right stop. 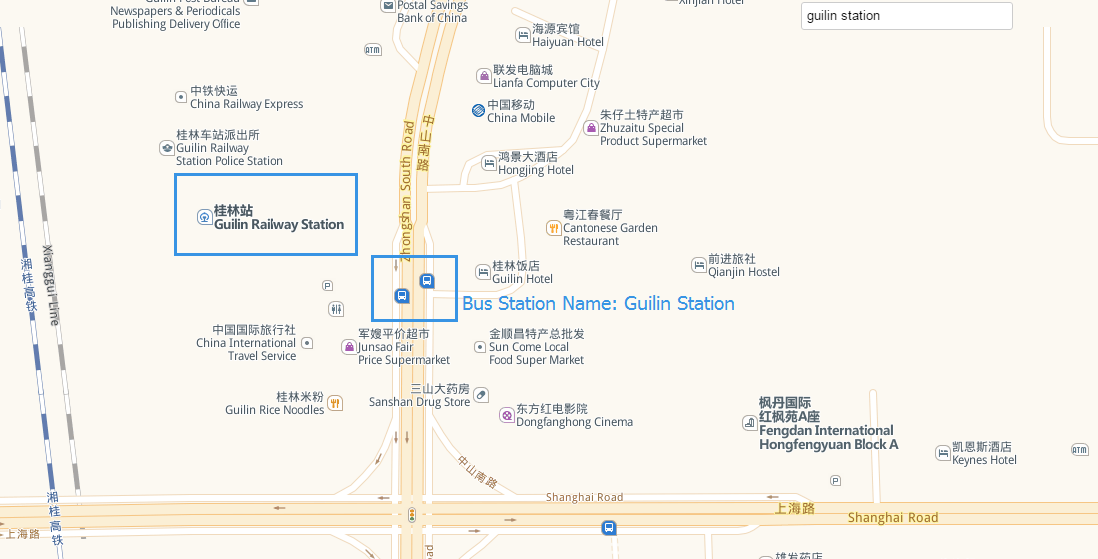 There is no specialized taxi stand around Guilin Station, but passengers can find many taxis and motorbikes waiting at the exit of the station. The taxi starting fare in Guilin is 9 yuan by the day and 11 yuan at night.

The Xiufeng District (秀峰区) is known as the city center of Guilin, and Guilin Railway Station is nearby. The Central Square is symbolic of Guilin’s center.

By bus: Nos.11; 99; 100， Guilin Railway Bus Station(桂林站) → Cross Street Bus Station(十字街)
1. Go the bus stop across the street.
2. Take the next available bus to the center square.
This takes about 20 minutes and costs 2 yuan.

Get to Other Transport in Guilin

Guilin Liangjiang International Airport is in a county called Lingui (临桂), which is far away from the city center.

>>> By airport bus:
1. Go to airport bus stop, it is called “机场大巴桂林民航大厦线” in Chinese, near the Guilin Aviation Hotel.
2. Take an airport express to Guilin Liangjiang Airport.

The route from the station to airport express

Get to Guilin’s Attractions from Guilin Railway Station

Guilin is a lay-back and small city, therefore, you can just spend 10 or 20 minutes walking to some famous attractions from Guilin Railway Station, such as Elephant Hill Park and Sun and Moon Pagoda.

To Sun and Moon Pagoda, 2.3 Kilometers

The route from the station to the pagoda

Sun and Moon Pagoda is located in Xiufeng District, not very far away from Guilin Railway Station.

If you decide to walk to there, you just need to walk along Zhongshan South Road (中山南路), about 25 minutes.

How to Go to Elephant Trunk Hill from Guilin Railway Station

>>> By taxi: The journey takes about 20 minutes and costs about 35 yuan.
>>> By bus: Take bus 3 from Guilin Railway Station and get off at Reed Flute Cave stop.

You are welcome to book your Chinese train tickets by using our China Train Booking app app. We will issue your tickets within 3 minutes and we offer free travel consulations.