Changsha South Railway Station, which opened in 2009, is a new and important high-speed train railway station, connecting the high-speed lines for Beijing to Guangzhou and Shanghai to Kunming.

It is not very close to the downtown area, taking about 30 minutes to reach if you take the subway to this station from the city center. 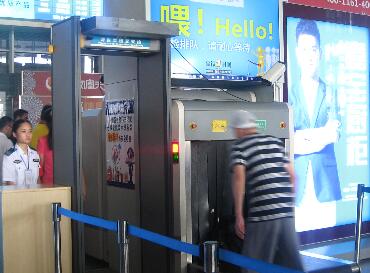 Passengers can enter the station from both buildings. West Station Building is the main building.

As a new and efficient railway station, passengers can benefit from the “zero transfer” in Changsha South Railway Station, because many types of public transfer transportation are located in the squares.

There are five floors in Changsha South Railway Station’s main building. They are for: the waiting area, the platforms, the arrivals, the subway, and the subway platforms.

Take the escalators to reach the main hall

If you take a bus to the station, you can see that there are two escalators leading to the north and south of the station. After disembarking from the bus, please take one of them to reach the station.

If you drive or take a taxi to the station, you will arrive directly at the station’s entrance. Please pass through the security check before entering the station.

* There are 11 security check machines, which only accept Chinese ID cards. The manual checking passage is located beside them.

If you take a subway train to the station, take an elevator or the escalators to reach the main hall.

There are three floors in total: the underground departures floor, the platforms, and the elevated floor.

The West Square is in Huahou Road(花侯路) direction and there are much public transportation such as highway coach station and long-distance coach station for travelers to transfer.

It is also a big social parking lot.

East Square is a new square, which opened in 2016. The maglev train station, bus station, and parking lot are all located here.

If passengers are going to board trains from the check-in gates 15–24, it is quicker to enter the station from East Square.

Learn how to collect your tickets and board trains by reading How to Collect Train Tickets in China and How to Board Trains in China.

Changsha Maglev Train Station is located in the northeast part of East Square.

The bus stations are all located in East Square and there are 15 bus lines for you to transfer to the different districts within Changsha.

If you take an airport express to Changsha Huanghua International Airport, you will be dropped off at the T2 Terminal Building.

We recommend you take a maglev train to the airport, as it is faster and more comfortable.

Passengers can go to Zhangjiajie, Yiyang, Fenghuang Ancient Town and many other places by taking a highway coach.

Popular Trains to Other Cities

Getting to Other Places from Changsha South Railway Station

Wuyi Square is in the center of Changsha and there are many attractions located around, such as Pozi Street, Mount Yuelu, and Dufu Pavilion.

There are also many large shopping malls in this square.

If you need to go to Wuyi Square from Changsha South Railway Station, taking a subway train is the fastest and easiest way to travel.

There is no railway station in Fenghuang Ancient Town so getting there by coach is recommended.

The ticket fare is about 140 yuan and it takes about 7 hours to get to Fenghuang Ancient Town.

To Changsha Railway Station and to Zhangjiajie

Here are the quickest steps:

There are seven normal-speed trains between Changsha and Zhangjiajie, running from 04:26 to 22:14. The journey takes about 5 hours.

There are two recommended ways of getting to Changsha Huanghua International Airport from Changsha South Railway Station.

It takes about 20 minutes to get to the airport.

Walk to Exit A of Changsha South Railway Station and you will see the stop of the airport express.
It takes about 1 hour and 20 minutes to reach the airport.

You may also be interested in reading this article: No Direct China Trains? These 3 Solutions Can Help You Out!

Get your China train ticket(s) and free travel advice by downloading our China Train Booking app!