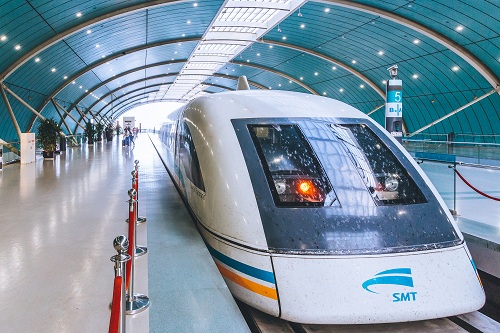 Where Does the Shanghai Maglev Train (SMT) Go?

The Shanghai Maglev Train connects Longyang Road to Shanghai Pudong International Airport. It is a non-stop train that only takes 8 minutes for the whole journey.

There are four ways to go to the PVG: SMT, subway, taxi, and airport express. Though the terminus of subway line 2 is Pudong International Airport, transfer from a subway to the SMT is much faster.

Duration from Longyang Road to PVG:

To ride on the SMT, you have to get to the Longyang Road Subway Station firstly. You can take subway line 2, 7, and 16 to arrive at the Longyang Road stop. After you get out of the station, the maglev train station is only 60 meters away.

The departure maglev train station is located at the second floor in the Terminal 1 (T1) of Shanghai Pudong International Airport.

If you arrive at Terminal 2 (T2), please use the shuttle bus to get to T1.

The platform for Shanghai maglev trains

How Much Is a Shanghai Maglev Train Ticket?

Different type of ticket costs differently. Check how much is a SMT ticket below:

How to buy a Shanghai maglev train ticket?

The maglev train ticket is not allowed to book online in advance. Please bring your passport and some RMB cash with you or make sure that you have Alipay or Wechat Pay to book a ticket at the counter.

Usually the supply of maglev train tickets greatly exceeds the demand. You don't have to worry about tickets sellout.

Shanghai Maglev Train is known as the world's fastest commercial electric train. Its average speed reaches 350 km/h and max speed can reach 430 km/h, making the journey of 30 km between Longyang Road and PVG less than 8 minutes.

There are only three countries that operate maglev trains in the world: China, Japan, and South Korea. Here is the chart to compare their speed.

The seats on maglev train

Shanghai maglev trains are modern, new and clean. The on-train facilities are better than those of other types of high-speed trains.

The space is generous, there are only a few passengers on each carriage. There are two LED screens on both ends of the carriages, which show the current speed of the train, and passengers like to take photos of them.

Is It Safe to Travel on Shanghai Maglev Train?

The track of maglev trains

Maglev train is considered as the most safe transportation in the world. Its technology has developed more than 50 years, since Germany has have started to research high-speed transit system in 1968.

Maglev train uses the technology of electromagnetic levitation to control the train and the guideway. Normally, the gap between the magnets and the guideway is ranged between 8 and 12mm.

After Germany has started to construct its first maglev train line in 1999, China decided to build the high-speed maglev line in Shanghai with the cooperation with Germany in 2000. However, due to a new forecast of a risk of huge losses, Germany has cancelled its domestic construction plan of maglev line in the same year. While China started to test our first maglev line in Shanghai in 2002. The Chinese Prime Minister Zhu Rongji and German Chancellor Gerhard Schroeder were among the first guests.

Since 2002 until now, Shanghai Maglev Train has served more than 50 million of passengers and runned a distance of more than 16.88 million kilometers.

1. Keep your ticket in bag during the whole ride. Maglev train tickets need to be recycled after you finish your journey. If you lost your ticket during the ride, you will be asked to buy a new ticket to check out.

3. Pets, dangerous and poisonous articles cannot be carried on the trains.

4. The weight of luggage carried by one person cannot exceed 23kg.

5. Tickets can be fully refunded before your train departs. Passengers need to go to the ticket center to get tickets refunds, the tickets should be valid and unused.

Other Maglev Train Lines in China

Changsha Maglev Train Line is the second maglev line in China. It started to operate since 2016, and it was designed and developed independently by China.

Beijing Subway S1 Maglev Line is the second maglev line that operates in low-speed since 2017. The maglev train connects Jin'anqiao and Shichang.

China started to build up its maglev railway that allows to operate a maglev train with the speed of 600 km/h in 2016. Once the new maglev line begins to operate, it will shorten the travel time between Beijing and Shanghai from 5.5 hours to 3.5 hours.

It's estimated that this fastest-ever train will be tested in end of 2020.

China Train Booking is an app to book your China train ticket anywhere and anytime. It supports multiple languages: English, German, French, Spanish, Italian, Japanese, Russian. Also it allows to pay with international credit card, PayPal, Alipay, Wechat Pay. It is called a must-have app to travel to China by thousands of users.