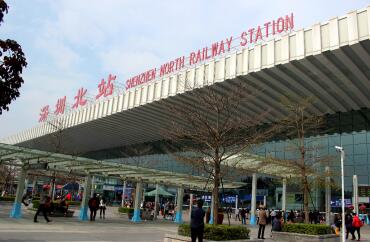 Shenzhen North Railway Station is one of the two high-speed train stations in Shenzhen, serving bullet trains to Hong Kong, Beijing, Shanghai, Guangzhou, Changsha, Guilin and so on.
Covering a total area of 2,400,000 square meters, Shenzhen North is an important transportation junction and one of the landmark projects among all the railway stations in China.

We’ve provided all the things about Shenzhen North Railway Station you might want to know. Here is a quick navigation:

High-speed trains to Hong Kong: There are 65 high-speed trains running to Hong Kong West Kowloon Railway Station daily, and about 10 of them are Vibrant Expresses (a new and fancy bullet train type).
Further Reading: Hong Kong – Mainland China High-Speed Trains
Get your Hong Kong train tickets via our China Train Booking app within only 3 minutes!

Zero transfer: A bus station, subway station, taxi stand, coach station, and parking area are all built inside Shenzhen North Railway Station. Passengers can simply follow the signs to transfer inside the station after they get off the trains.

Only serves high-speed trains: Shenzhen North is a high-speed only station — it serves various kinds of bullet trains, such as G-trains, D-trains and C-trains.

You can look up all Shenzhen train schedules on our China Train Booking app.

Xiamen, enjoying a subtropical monsoon climate, is one of the most popular cities for travelers in China, and Gulangyu Island is a representative attraction in Xiamen.

Chaoshan is a traditional city at the border of Guangdong and Fujian.
It has its own Hakka culture and Chaoshan cuisine is one of the eight major cuisines in China.

This line covers many cities along the Yangtze River Delta. Passengers can enjoy famous attractions along this railway line, such as West Lake, Lingyin Temple, and Yandang Mountain.

We prefer to call the Wuhan – Shenzhen high-speed line a “Gourmet Route” because it passes through two famous gastronomic cities — Wuhan and Changsha.

Wuhan is an ancient city that has existed since the Spring and Autumn Period of China. It has many historical heritages as well as various delicious local foods.

Changsha is the capital of Hu’nan and Hu’nan is the hometown of Chairman Mao, so there are many Chinese Communist Revolution attractions and museums. It is identified as the cradle of China’s Red Revolution. In addition to its “red history”, Changsha is definitely a foodie's paradise. There are many delicious spicy dishes and street snacks, such as stinky tofu and spicy crayfish.

You can use the China Train Booking app for free anytime and anywhere to find the Shenzhen North Railway Station online map on your smart phone.

The Layout of Shenzhen North

Shenzhen North can be divided into three main areas: the main hall, East Square and West Square. There are five floors in total and F1 in the West Square shares the same altitude with F3 in the East Square because the integrated layout of the station is high in the east and low in the west.

Here are the detailed functions of each floor:
Basement floor: Metro Line 5 (in the East Square)

Further reading: How to Board Trains in China.

The left luggage service is in the middle area of F3, near the VIP Business Class Waiting Area. There is a charge about 10 yuan for each piece of luggage collected within 12 hours, and there is an extra charge if left for longer than 12 hours.

Transfer to Another Train at Shenzhen North

It is easy to transfer to another train at Shenzhen North. You can simply follow the “Transfer” indicator after getting off the train and it will lead you straight to the waiting area.

You can also show this translation to the station staff if you can't find the right way to go:
你好,请告诉我站内换乘通道在哪里?
(Excuse me, could you tell me where I should go to transfer to another train?)

See more details by clicking How to Transfer to another Train in China.

What to Eat at Shenzhen North Railway Station

For Western-style food, you can find McDonald’s, Dicos, McCafe and Starbucks on Floor 2.
For local Chinese food, there are some restaurants on Floor 2 selling some homely dishes, such as Kung Fu Restaurant (真功夫) and East Dawning (东方既白).

Passengers can take buses on both Floor 1 and Floor 2 in the East Square. We recommend, however, that you take the subway if lines are available, for it is more convenient and it's easier to find your way.

Here are some popular bus routes:

There are two places for passengers to catch a taxi at Shenzhen North. One is in the East Square and the other is underneath the parking area of West Square. The starting fare is 10 yuan.

Futian District is the city center of Shenzhen. Futian Port, Window of the World, East Overseas Chinese Town, and Splendid China are all in Futian. Furthermore, travelers can go to Hong Kong directly from Futian Port.

>>> By Subway: Line 4, seven stops.
Take Metro Line 4 at Shenzhen North Railway Station stop, and get off at Convention Center (会展中心) stop.
This journey takes about 30 minutes and costs 4 yuan.

Getting to Other Places from Shenzhen North Railway Station

Futian District is at the center of Shenzhen. Futian Port, Window of the World, East Overseas Chinese Town, and Splendid China are all in Futian. Furthermore, travelers can go to Hong Kong directly from Futian Port.

>>> By Subway: Line 4, seven stops.
Take Metro Line 4 at Shenzhen North Railway Station stop, and get off at Convention Center (会展中心) stop.
This journey takes about 30 minutes and costs 4 yuan.

>>> By Subway: Line 4 → Line 1, 14 stops.
1. Take Metro Line 4 at Shenzhen North Railway Station Stop, and get off at Convention Center (会展中心) stop
2. Transfer to Metro Line 1 and get off at Luohu stop (罗湖站).
This journey takes about 50 minutes and costs 5 yuan.

>>> By Subway: Line 4, seven stops.
Take Metro Line 4 at Shenzhen North Railway Station Stop, and get off at Convention Center (会展中心) Stop
This journey takes about 30 minutes and costs 4 yuan.

>>> By Subway: Line 5 → Line 11, 16 stops.
1. Take Metro Line 4 at Shenzhen North Railway Station Stop, and get off at Qianhaiwan Station (前海湾) stop.
2. Transfer to Metro Line 11 and get off at the Airport stop (机场站).
This journey takes about one hour and costs 8 yuan.

There are 2 ways for passengers to get to Hong Kong from Shenzhen: via a passenger port in Shenzhen or taking a Mainland–Hong Kong High-Speed Train.

For more information about how to travel to HK, you are welcome to get the free and personal consultation by sending us a FAQ on China Train Booking app!

>>> By Coach
Shenzhen North Coach Station is at the West Square of the railway station. Coach tickets to Hong Kong International Airport are available.

This journey takes about two hour and costs 180 yuan.

>>> By Subway
1. Undergo some customs procedures at Futian Port.
2. After arriving at Hong Kong, take subway East Rail Line(東鐵綫) at Lok Ma Chau (落马洲) stop, and get off at Sheung shui(上水) stop.
3. Transfer to Bus A43P and get off at Terminal 1 stop (机场站).

There are two main ways to go to Macau from Shenzhen North: Taking a ship or going through Gongbei Port around Zhuhai Railway Station. We recommend you to pass through the Gongbei Port in Zhuhai to get to Macau, here are the basic steps:

1. Buy a train ticket from Shenzhen North to Zhuhai.
2. After arriving at Zhuhai Railway Station, please follow the signs to reach Gongbei Port (拱北口岸), about 5 minutes.
3. After undergoing the customs procedures with your passports, you will arrive at Guanzha Port in Macau.

Still have questions? Why not send us a FAQ on our China Train Booking app and get the free answer within 2 hours!

You are also welcome to book Chinese train tickets and get authentic traveling tips with China Train Booking App: