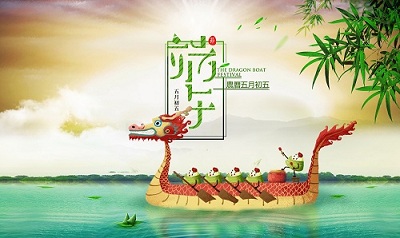 Dragon Boat Festival, also known as Duanwu Festival, is one of the four traditional and important celebration in China. The other three are Chinese New Year, Mid-Autumn Festival and Qingming Festival. It has a history of more than 2,000 years, and is believed to have originated during the Warring States period. Dragon boat racing and eating Zongzi are the central customs of the festival.  Dragon Boat Festival 2021 falls on June 14 (Monday). The public holiday in China is from June 12 to June 14.

There are various origin stories related to the Dragon Boat Festival, the best known legend is to commemorating Qu Yuan, which is widely regarded as the real origin. Qu Yuan (340–278 BC) was a patriotic poet and a loyal official of the state of Chu during the Warring States Period. He was loyalty and devoted his whole life to assisting the king to build the State of Chu stronger but he was slandered by jealous officials and accused of treason, and the King dismissed and exiled him. He wrote many enduring poems to show his love and passion for his country during his exile.

Among his masterpieces were Li Sao ( The Lament), Jiu Ge ( Nine Odes) and Jiu Zhang ( Nine Chapters). These are still very famous in China.

In 278 BC, Qu Yuan committed suicide by drowning himself in the Miluo River on the 5th day of the 5th lunar month after witnessing the collapse of his country. The local people were very sad after heard of Qu Yuan's death. They sailed boats to search his body but were unable to find him. To preserve his body, the locals paddled their boats up and down the river, hitting the water with their paddles and beating drums to scare evil spirits away. They also threw Zongzi (sticky rice dumplings) to the fish, so that they would not eat Qu Yuan's body.

Now Chinese people eating zongzi on the Dragon Boat Festival is to show people's respect and admiration for Qu Yuan.

Duanwu Festival(Dragon Boat Festival) is a folk festival celebrated for over 2,000 years, so the traditions are various for Chinese people. The most traditional customs include dragon boat racing, eating sticky rice dumplings (zongzi), hanging Chinese mugwort and calumus and drinking realgar wine.

Due to the legend of Quyuan, Dragon Boat Racing is the most ceremonial activity held during the Dragon Boat Festival.It is said that people paddled their boats up and down the river, hitting the water with their paddles and beating drums to scare fish away to preserve his body. Nowadays, it has become an important competitive sport. A team of people works together to reach destination. Once competition start, a member who sits in the head of the boat beating a drum and team members paddle harmoniously at a pace which is set by the drummer, and do their best synchronized efforts.

Nowadays, it has become an important competitive sport. A team of people works together to reach destination. The boat is generally long and narrow, with a dragon head on the bow and a dragon tail on the stern. Most of them colored in red. The length of the boat of the Han nationality is generally 20-30 meters, and there are about 30 members on each boat.

Once competition start, a member who sits in the head of the boat beating a drum and team members paddle harmoniously at a pace which is set by the drummer, and do their best synchronized efforts.

Some places in China will hold Dragon boat races to celebrate the festival, especially in southern China. The best known is Miluo River International Dragon Boat Race Center which hold in Yueyang city, Hunan Province. And you can aslo see it in Hangzhou City, Zhejiang Province.

The most traditional Dragon Boat Festival food is Zongzi (粽子zòngzi). As the legend said that people threw ZONGZI (sticky rice dumplings) to the river, so that fish would not eat Qu Yuan's body after he committed suicide by drowning himself in the Miluo River.

Zongzi usually are made of glutinous rice filled with meats, beans, and other fillings and wrapped in triangle or rectangle shapes in bamboo or reed leaves. The flavors of zongzi are different since people in north China usually filled it with the jujubes while the south filled it with sweetened bean paste, fresh meat.

It is not very hard to make Zongzi. Prepare all the materials in advance, the sticky or glutinous rice and the fillings and knead it together. And then use the bamboo leave to wrapped it in pillow shapes,and tied with plant stems.

You can taste Zongzi in most cities in China during the holiday. People in central Guangxi Province enjoy making zongzi filled with meats, which we called Pork Sticky Rice Bundle. And people in Beijing are making zongzi by using jujube and sweet bean paste as fillings. If you are in China these days, you probably can buy it in supermarket or food market. Some hotel will offer it as a breakfast.

People can enjoy 3 days holidays of Dragon Boat Festival in 2021. To have a worry-free and smooth journey, we recommend our customer to place the trip and make a booking for hotel or train ticket in advance.