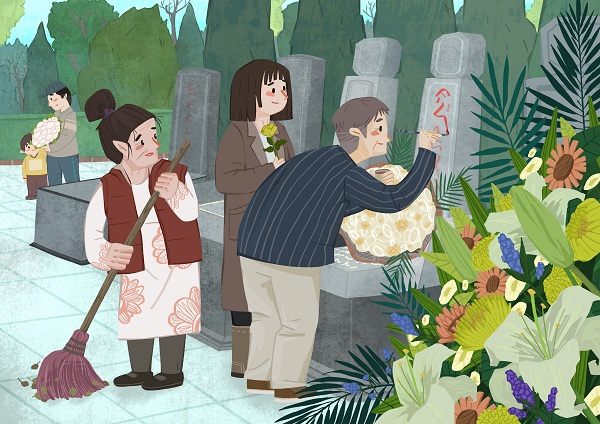 Qingming Festival，also known as Tomb Sweeping Day or, literally,‘Pure Brightness’ Festival in English, is a traditional Chinese festival and an important day for most people. People usually go to sweep tombs and commemorate their ancestors during the holiday. Many Chinese also go for a picnic during Qingming Festival to enjoy the picturesque scenery of spring.

It is said that the Qingming Festival was originally held to commemorate a loyal man living in the Spring and Autumn Period (770 - 476 BC), named Jie Zitui. One day in 655 BC, when Prince Chong'er was about to starve to death, Jie Zitui secretly cut a piece of flesh from his own leg in order to save the prince. Chong'er wondered where Jie had obtained the soup. When he found out what Jie had done, the prince was so moved that he promised to reward him one day. Nineteen years later, after taking power, Duke Wen greatly rewarded and honored all of his followers, but he forgot Jie Zitui, the man who once saved his life. When others spoke of Jie Zitui, Duke Wen remembered him and was ashamed and decided to reward him.

However, Jie Zitui refused to meet the prince because he didn’t want to be an officer so he hid on a nearby mountain with his aged mother. Duke Wen set fire to the mountain to force Jie Zitui out of hiding. Later Jie was found dead with his mother. In honor of Jie Zitui, a man who never sought fame and profit, Duke Wen buried him and his mother respectfully, held a memorial ceremony for the tomb, and ordered his subjects not to use fire and only to eat cold food on that day. And ordered that the day Jie died was Hanshi (Cold Food) Festival (part of the Qingming Festival nowadays).

worship the ancestors and spring outings are the two major activities of the festival. And other like kite flying, and putting willow branches on gates or on the head have been an important part of this festival since the beginning. Actually it is a holiday combination of sadness and happiness.

Tomb sweeping is regarded as the most important custom in the Qingming Festival. People commemorate and show respect to their ancestors by visiting their graves, cleaning the tomb and offering food, tea or wine, burning incense, burning or offering joss paper (representing money), etc. With cremation taking over from burying,the custom has been greatly simplified today, especially in cities, where many people only put flowers to the dead relatives. No matter how respect is shown,all these are expressed a good prayers for the deceased.

For people is it not only a day for commemorating the ancestors, but also a time for enjoy themselves. During March, people get out and enjoy the spring blossoms and brightly sun shines. It is a good time to go out and to appreciate the beautiful scenes of nature. It marks the beginning of the season when people spend more time outside as the weather warms up.

Many people are enjoyed flying kites during the Qingming Festival. In the past, people cut the string to let the kite fly freely. People believe that this custom can bring good luck and eliminate diseases. This is why you might sometimes find paper kites lying on the ground in parks and fields.

Many people are enjoyed flying kites during the Qingming Festival. In the past, people cut the string to let the kite fly freely. People believe that this custom can bring good luck and eliminate diseases. This is why you might sometimes find paper kites lying on the ground in parks and fields.

The most traditional Qingming festival food is sweet green rice balls. It is made of a mixture of glutinous rice powder and green vegetable juice and this is then usually filled with sweet red or black bean paste. Sweet green rice balls are jade-green in color, glutinous in taste, and sweet in aroma. People usually cooked one or two days before the arrival of the Qingming Festival so people can eat and recreate during the holidays. Also people like to took it to worship their ancestors.

The Qingming Festival falls on April 4.2021, the same day as Easter. It falls on either April 4th or 5th of the gregorian calendar, is one of the Chinese Twenty-four Solar Terms. Easter is an important holiday in the West. Unlike qingming festival, people to commemorate their ancestors, Easter is for Christians to commemorate Christ's resurrection from the dead three days after crucifixion.

Further reading:
How to Get COVID-19 Vaccine for Foreigners in Shanghai?
China Entry and Travel Restrictions in 2021
Baggage Rules of China Railway