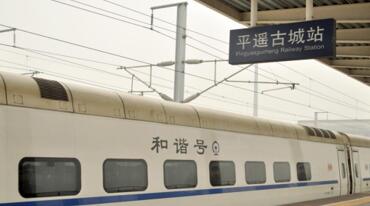 You can check all the schedules on China Train Booking app ( IOS, GooglePlay, Android APK ).
To find out how to book train tickets in China, please see How to Buy a China Train Ticket .

Pingyao Gucheng is quite a small station with only one floor, two platforms, and an independent ticket building (on the right-hand side of the main hall).

It has, however, good facilities and convenient services, such as Wifi and mobile phone charging services.

There is a station square in front of the main building, where travelers can take buses or taxis.

* Please note there is no restaurant at the station.

* There are only 2 platforms at Pingyao Gucheng Railway Station. One goes in the direction of Xi’an (marked 西安方向), while the other goes to Beijing or Taiyuan (marked 北京, 太原方向). Find the platform for boarding according to the arrival station shown on your ticket(s).

Language help:
“您好，这是我的车票。请问我应该在哪里候车？”
“Hello, this is my ticket. Could you please tell me where I should wait to board?”

There is only one available bus line – no. 108 – at Pingyao Gucheng Railway Station. It goes to some major tourist attractions in Pingyao, including: Pingyao Ancient City (平遥古城) and Shuanglin Temple.

There’s a taxi stand in front of the station square.

Getting to Other Places from Pingyao Gucheng Railway Station

Pingyao Railway station only operates normal trains to and from some cities such as Beijing, Taiyuan, Xi’an, Chengdu, Tianjin, and Datong.

It is very close to Pingyao Ancient City; you can get there by taxi in 5 minutes.

Since Pingyao Railway Station only serves normal-speed trains, you might need some tips for choosing your train type, and seat class, and for how to spend pleasant hours on a long-distance train journey. Here are two articles for your reference:

Pingyao Ancient City (平遥古城) is listed by UNESCO as a World Heritage site. It was built in the Ming (1368-1644) and Qing (1644-1912) dynasties. There are many ancient houses, city walls, and streets in Pingyao, and it’s regarded as the most intact ancient city in China.

We suggest two ways for passengers to get to Pingyao Ancient City.

Since Shuanglin Temple is not far from Pingyao Gucheng Railway Station, taking bus no. 108 is recommended. Here are the specific steps:

We have helped a number of foreign customers get their tickets to Pingyao and facilitated their trips in China. Our door-to-door ticket-delivery service and 1-to-1 after-sales service (GMT+8, 08:00–23:00, 24/7) will make your train journey in China easier and smoother.