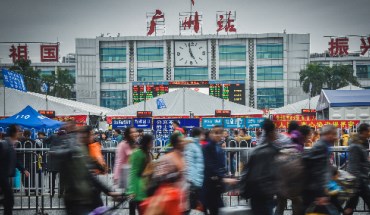 Guangzhou Railway Station is one of the important railway stations in China. It is a big, old station in the west central city area, and has intercity trains operating to Shenzhen, Foshan, and Zhuhai.

There are also many normal-speed trains operating to Beijing, Shanghai, Changsha, Guilin, Wuhan, Lhasa, and so on.

>>> Check the Guangzhou train schedules and book your ticket(s) on our China Train Booking app now.

The Layout of Guangzhou Railway Station

Guangzhou Railway Station has a two-story main building and one front square.

Below are First floor and Second floor of Guangzhou Railway Station

What to Eat at Guangzhou Railway Station

As you probably already know, Guangzhou is considered to be a gourmet's paradise. Even though there are few restaurants in Guangzhou Railway Station, you can still taste some of Guangzhou's special flavors there.

For Western-style food, you can find a KFC restaurant on F1.

For local Guangdong food, you can try some fast-food at Three Meals a Day (一日三餐) and Kung Fu Restaurant(真功夫). Even though the food won't be quite as refined, you can still enjoy some tasty Cantonese cuisine.

Location: the east side of the square

Getting to Other Places from Guangzhou Railway Station

>>>By airport shuttle bus 1: The journey takes 1 hour 6 minutes and costs about 20 yuan.

>>>By subway: Metro Line 5→ Metro Line 3, eight stops in total
Take Metro Line 1 at Nanjing Railway Station and get off at Xuanwu Gate.
The duration is about 15 minutes and it costs 2 yuan.

Read How to Buy China Train Tickets to buy your ticket(s) to Guangzhou here!

We strongly advise you to use our service to the ticket(s):

Fast: Tickets can be issued within 3 minutes.
Flexible: Call our hotline number and make changes to your train journey schedule(s).
Convenient: Choose our delivery service to have your ticket(s) delivered straight to your door.
Reliable: Payments are made safely and quickly online via PayPal, Alipay, and credit card.
User-friendly: Download our PDF instructions in case there is no network connection.