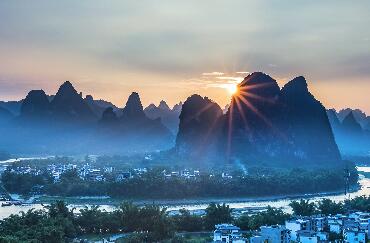 Yangshuo Railway Station serves high-speed trains between Guilin, Guangzhou, Chengdu, etc. It’s not located in Yangshuo County, but in a nearby town called Xingping (about an hour’s drive to West Street, Yangshuo), which is also a beautiful traveling destination.

Yangshuo Railway Station is located in Xinping Town, which is about 35 kilometers/21.7 miles away from Yangshuo’s county center.

Yangshuo to Other Popular Cities

The Layout of Yangshuo Railway Station

Getting to West Street, Xingping, Airport from Yangshuo Railway Station

>>> By high-speed rail express: This journey takes about 40 minutes and costs about 50 yuan.
There are high-speed rail expresses waiting outside Yangshuo Railway Station. You can take the express to reach Yangshuo Coach Station (阳朔汽车站), which is located in Yangshuo’s county center and you can walk to West Street by only about 15 minutes.
This journey takes about 1 hour and costs 20 yuan per person.

>>> By high-speed rail express: This journey takes about 30 minutes and costs about 10 yuan per person. Please get off the express at Xingping Coach Station (兴坪汽车站).

The photograph on Chinese 20 Yuan Note is the scenery in Xingping. If you want to take a photo of the same scenery, you can go to Xingping Dock.

We highly recommend you take a long-distance coach/airport express to Guilin Liangjiang International Airport, the distance is closer than going to Guilin, and then transfer to the airport.

Here is the route:
1. Take a taxi to Yangshuo South Coach Station (阳朔汽车南站).
2. Take a coach from there to reach Guilin Liangjiang International Airport directly. The fare is about 50 yuan per person.

There are two ways of getting to Yulong River from Yangshuo Railway Station:

>>> By coach
1. Take a coach from Yangshuo Railway Station to Yangshuo.
2. Transfer to another coach at the coach station and get off at Jinlongqiao Dock (金龙桥码头

>>> By coach + electric scooter
There are many scooter rental agencies in Yangshuo. If you know how to ride a scooter, we highly recommend you rent one to discover Yangshuo.
1. Take a coach to the West Street.
2. Find a scooter rental agency and rent one for a day. (There are many agencies in the street)).
It costs about 50 yuan to rent a scooter for one day, and you need to pay 300 yuan as a deposit.

You are welcome to get a free use of our China Train Booking app to get your China train tickets within 3 minutes!

Discover how to buy/book a China train ticket: How to Buy a China Train Ticket .